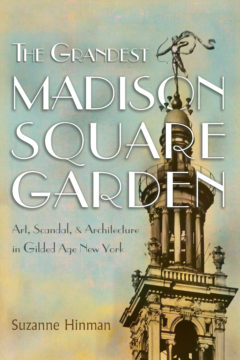 “Art historian Hinman tells the story of New York City’s second Madison Square Garden entertainment complex, which opened in 1890. Her central figures are architect Stanford White (1854–1906) and sculptor Augustus Saint-Gaudens (1848–1907), with White’s trendsetting firm of McKim, Mead & White designing the Italian Renaissance-style ‘pleasure palace,’ its arena, exhibition hall, theater, concert hall, and restaurant boasting the world’s largest indoor space and the city’s tallest tower. To crown the tower dome, Saint-Gaudens produced a weather vane in the form of the gilded goddess Diana. The narrative delves into contemporary art, architecture, construction, and show business, depicting White and Saint-Gaudens as talented, influential, and controversial. Hinman reports that though both were married with children, they allegedly participated in a bisexual demimonde that included the exploitation of young models. White was famously shot dead at the Garden by an aggrieved husband of one of those models. The venue, though well-established as a landmark and cultural hub, consistently lost money and was demolished in 1925. Hinman observes the complex lives of her subjects with assurance in this accessible study that will appeal to readers interested in late 19th-century American architecture and sculpture, New York City, and LGBTQ history.”—Library Journal