"This book is of real importance. Frohne has drawn together all of the information about the African American burial ground in one place and analyzed it within the context of the history of enslaved Africans in New York."—Gretchen Sullivan Sorin, director and Distinguished Professor, Cooperstown Graduate Program, SUNY Oneonta

"A timely addition to the scant literature about a well-known but understudied aspect of African American history in early New York City."—Graham Hodges, professor of history and Africana and Latin American studies, Colgate University

"Author Andrea Frohne, an art historian at Ohio University, tells the story in this absorbing volume that recounts the tale of discovery, public controversies, and archaeological research and analysis. The book is an important case study in public archaeology and how the nation's historic preservation laws can be utilized for the public's benefit, even if the process is a torturous one."—American Archaeology

"The strength of Frohne’s work lies in her analysis of maps and other primary sources combined with contemporary works to reconstruct the struggle of Africans and African Americans as they lived, died, and were buried in New York City during the colonial period, and the struggle to preserve that history and their remains in the twentieth and twenty-first century. The book is instructive in regards to geography as well as the theme of sacred space. I highly recommend this book."—Historical Geography

"This book’s creative and interdisciplinary approach to memory studies reaches beyond the site to inform examinations of erasure and memorialization of diasporic communities more generally as well as the understanding of pan-African spirituality in the past, present, and future."—Social & Cultural Geography

"Frohne renders the various material and figurative layers of this complex history, as well as what she describes as its irreducible spiritual dimension, in fulsomely illustrated, meticulously documented detail."—Eden Osucha, CAA.reviews A Publication of the College Art Association

In 1991, archaeologists in lower Manhattan unearthed a stunning discovery. Buried for more than 200 years was a communal cemetery containing the remains of up to 20,000 people. At roughly 6.6 acres, the African Burial Ground is the largest and earliest known burial space of African descendants in North America. In the years that followed its discovery, citizens and activists fought tirelessly to demand respectful treatment of eighteenth-century funerary remains and sacred ancestors. After more than a decade of political battle—on local and national levels—and scientific research at Howard University, the remains were eventually reburied on the site in 2003.

Capturing the varied perspectives and the emotional tenor of the time, Frohne narrates the story of the African Burial Ground and the controversies surrounding urban commemoration. She analyzes both its colonial and contemporary representations, drawing on colonial era maps, prints, and land surveys to illuminate the forgotten and hidden visual histories of a mostly enslaved population buried in the African Burial Ground. Tracing the history and identity of the area from a forgotten site to a contested and negotiated space, Frohne situates the burial ground within the context of late twentieth- and early twenty-first-century race relations in New York City to reveal its enduring presence as a spiritual place.

Andrea E. Frohne is associate professor of African art history at Ohio University with a joint appointment in the School of Interdisciplinary Arts and the School of Art and Design. 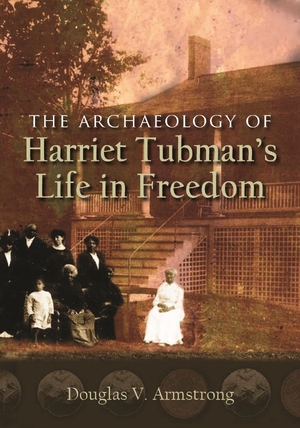 The Archaeology of Harriet Tubman's Life in Freedom