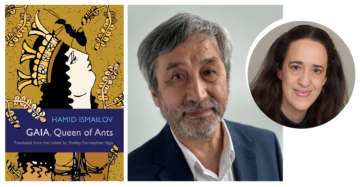 Join us for an author talk with Uzbek novelist and poet Hamid Ismailov. He will be joined by translator Shelley Fairweather-Vega to discuss his work and the art of translation. The first five people who register for this event (either virtually or in-person) will receive a copy of his book. This event will be held both in-person and virtually.

Register now for the virtual event

Uzbek novelist, poet, and journalist Hamid Ismailov will discuss his work and read from his recent novel Gaia, Queen of Ants, published by Syracuse University Press. Born in an ancient city in what is now Kyrgyzstan, Hamid Ismailov was forced to leave his home in Tashkent in 1992 when his writing brought him to the attention of government officials. He moved to London and joined the BBC World Service, where he was the first-ever Writer in Residence, a post he held for 25 years. In addition to journalism, Ismailov is a prolific writer of poetry and prose, and his books have been published in Uzbek, Russian, French, German, Turkish, English, and other languages. Critics have compared his books—including The Railway, A Poet and Bin-Laden, and The Dead Lake—to the best of Russian classics, Sufi parables, and Western postmodern works. He has translated Russian and Western classics into Uzbek, and Uzbek and Persian classics into Russian and several Western languages.

For more information or to request an accommodation, contact lkuerbis@syr.edu.